Episode 7 – Whatever Happened to Baby Trapjaw?

YOU CAN’T MAKE THIS SITH UP

This week in You Can’t Make This Sith Up – Toborro’s Courtyard. For all of you who spend more than 30 seconds on the fleet in a day, you might have noticed that 75% of all group content seems to revolve around Toborro’s Courtyard. You see, this fight has become very popular due to the large amount of rewards one can receive for being bored to death for 5-6 minutes. In a recent trip to Toborro’s Courtyard a healer, whose name has been redacted to protect the integrity of her guild, was told that she could not, in fact, solo heal Toborro’s Courtyard in story mode because it was “too hard”. When the healer woke up after blacking out from anger, she found that after 10 minutes of waiting the group leader still had not found another healer. Another 5 minutes passed and just as she was about to unplug her internet, lo and behold a healer appeared in the group. Then began the dance of queuing, un-queuing, re-queuing, and repeating this process until Toborro finally showed up in the box. After 30 minutes of waiting, the fight had finally begun, but as soon as the tank pulled the boss the 2nd “healer” said “im spec’d dps just FYI”. The fight continued and by the end, miraculously, some way, somehow, surprisingly, in an M Night Shymalahn style twist, everyone had fucking lived.

Mal: Here is what I did to get my point tally.

#1 Get at least some stronghold bonus, mine is 150%. Also buy the legacy bonus to reknown levels 1-5. Also make sure you have renown boosts, you can buy them off a vendor and are worth it. If you are friendly with a guildmaster, ask for the ship renown bonus perk. Also LOOK AT THE DAILY BONUS in the activity finder. Picture included.

#2 Do it on the character I play the most. The main for my raids became my main for everything. SM raids with lots of good trash to look out for– EC, Dxun, TOS, Ravagers. EC is probably the easiest because it’s super short.

#3 Jump in those TC and Hive Queen runs. Hive Queen is nothing to be afraid of on SM, you dont have to do any mechanics and there is so much trash plus the rewards at the end for spending 5-10 minutes in a zone

#4 Do Fractured MM, it can be done with 2 good people and a companion in 10-15 minutes for a good reward

#5 Heroics and Dailies – I have a spreadsheet for Imp and Pubside in regards to which Heroics I have found to be the fastest– data is for a non-stealth class, obviously if you can stealth a lot of them are super fast. While you do the Heroics and weeklies also complete the planetary kills the bonus there has 2 tiers. You are there anyway, might as well get the max number of points. Also some of the heroics have super easy bonuses. If you feel like they would be super fast, add that on too. Some of them are too tedious to be worth it so skipping is fine. Once you do the weekly, the next day you can go back and just focus on the fastest missions and the 2 kill tiers. 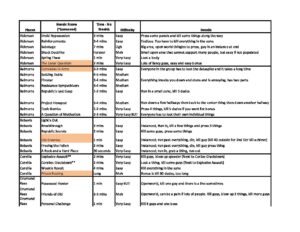 Dailies same thing– I do Czerka in 10 mins, Ziost in 15, Black Hole in 15. These are usually the only ones I do UNLESS the bonus is for Daily Areas. Then I’m gonna add on Yavin, Ossus, and Section X. I never do Iokath because I hate that entire place so if you love Iokath go for it otherwise fuck it

#6 A blast from the past– Eternal Championship! If you have a friend you can recruit to go do this with you, there is a Solo+ mode of it and it gives great renown for just 15 mins or so of content.

Seriously this is what I did, rinse and repeat. These are things you can do mostly all by yourself without the need of a group of flashpoint jackasses.

YOU HEARD IT HERE LAST – NEWS